skip to main | skip to sidebar

The Varieties of Anomolous Experiences in Jewish Literature - The Komarno Rebbe

Rabbi Yitzchak Isaac Yehuda Yechiel Safrin of Komarno (1806-1874) was a Hasidic Kabbalist who was known for his asceticism and mysticism. From a very young age he was acknowledged to possess telepathic powers. The following is an account from his son, where Rabbi Safrin's telepathic powers were tested.


"When his study partner heard this he wanted to test him to see whether it was true. The study partner said to him: 'I do not have to believe you that you see and know the spiritual nature of the Tannaitic and Amoraitic sages from what you have learned.'


"My father replied: 'If you want to know if the truth is with me, take a piece of paper and write down the names of men, women and children in this city of Pintshov, for you know that I do not know anyone in this city. Also, if you want, you can write names of people from a different city.


"Immediately his study partner agreed to the plan. He wrote down names of men, women and children and the names of their mothers from this city of Pintshov after investigating the people of the city for three straight days.  Afterwards, his study partner came before my father with the names of the people in the city and from outside the city; all of these were people that the study partner personally recognized. There were about three hundred names on the paper. My father told him about each person's character; if he was a Torah scholar or ignoramus, a G-d-fearing person without Torah knowledge or a wicked person, a worker or an infant, a rich person or a poor person. For each person he was correct.


"His study partner wanted to test him more so he wrote fictitious names. My father replied: 'What have you done! These names are not found in these cities!' Immediately he acknowledged the truth.


"When the study partner told me this story he wept greatly and said: 'I am not allowed to tell you more of the things that I saw with my eyes since I agreed to not reveal these matters to anyone.'"
Posted by Yona at 4:29 PM 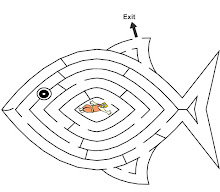